People are so gosh-darned clever sometimes.

One of my favorite things — a bold proclamation from a girl who abhors committing to favorites — is great advertising. When it’s done right, it combines snappy writing, clever design and bold art to make the familiar provocative or the new compelling. There’s nothing that earns my respect like being able to say something witty in a handful of words and make it look pretty. 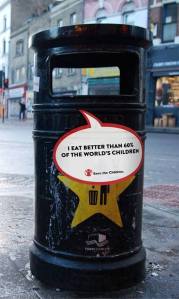 The other day I stumbled upon a fabulous ad from Save the Children. It’s a speech bubble stuck onto a trashcan, emblazoned with a statement: “I eat better than 60% of the world’s children.”

Everything about the concept works. Putting that statistic on a trashcan gives it the context it needs to be truly heartbreaking. The advertiser didn’t overwrite the copy or complicate the design with crazy graphics. It’s simple and to the point, which — in my uneducated opinion — drives the point home like nothing else. (If you have to think too hard, the ad’s not doing its job.) This ad is immediately understandable, and by making it something city-goers have to interact with, it forces viewers to consider the message: The random leftovers thrown into this random trashcan in a random city are more substantial than what the majority of the world’s children eat. If that doesn’t give you pause when you’re tossing an apple that’s a little too soft for your taste, nothing will.

Taking a very different approach to getting people interested in a good cause are some ads I found when looking through my computer files. (Full disclosure: I have a folder called “Art and Ads” on my laptop that’s been there as long as I can remember. Yes, I recognize this probably isn’t normal. No, I don’t care.) A few years back, UNICEF did a series in support of their Tap Project, which is all about giving kids access to clean water. I don’t think it takes much convincing to get people to agree that everyone deserves clean water, but getting people to donate is a whole other story.

Instead of bombarding viewers with sad statistics or tragic photos, the designer breaks out the wit. My personal favorite reads: “Hipsters, if it helps, nobody else is doing it.” It’s timely, tongue-in-cheek and doesn’t take itself seriously, which is why I think it works so well. They take something pretty standard and make it memorable. That’s great design.

The Save the Children and UNICEF ads are nothing alike, except for being minimalist graphically, but that’s what I love so much. Together, they show the potential of advertising to make you stop and think — all the while disguised as an everyday object or a silly one-liner.